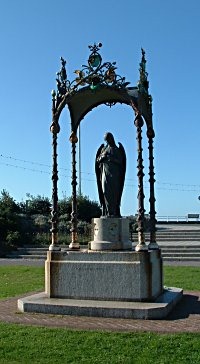 Memorial Inscription IN MEMORY OF EMANUEL EMANUEL, ALDERMAN, J.P. WHO WAS MAYOR OF PORTSMOUTH 1866-67 THIS FOUNTAIN WAS GIVEN TO THE PEOPLE OF PORTSMOUTH BY HIS SON AND DAUGHTER BARROW EMANUEL AND LADY MAGNUS

Alderman Emanuel EMANUEL J.P. was born circa 1808 at St Giles, London England; and his father was Moses EMANUEL. His uncle was Joel EMANUEL. Moses had 'come to England from Steinhardt in Bavaria, was naturalized in 1801, and lived in Hanway Street, off Oxford Street in the West End of London'. His brother was Ezekiel EMANUEL.
He married Julia MOSS circa 1839; and they had six children  have seen eight mentioned elsewhere

This, and all our other databases have terms of use attached to them.
See our terms of use.