Ports were the first points of settlement and a community in Liverpool sprang up. The Liverpool traders sent travellers to Manchester. A handful of Liverpool pioneers decided to try to make a life in Manchester.

Prior to 1788 no Jewish name appears in any local directories for Manchester. In 1788 there was a flower dealer Hamilton LEVI but it is not known if he was Jewish. In 1794 a piece of land in Pendleton (Salford) was purchased for burials. This cemetery was in operation until the 1830s. This cemetery served a handful of Jews who came from Liverpool in about 1792. These Jews met in Garden Street for prayers and this venue was Manchester's first synagogue. By 1813 a former warehouse in Ainsworth Court (off Long Millgate) had a regular reader and was being used as a Synagogue. Manchester's first purpose-built synagogue was opened in Halliwell Street in 1824. 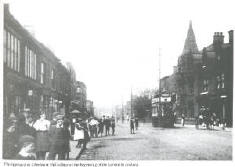 Liverpool's Jewish community began in 1742 and it was the largest provincial community, until the mid-1800s. Liverpool Jewry is well documented. Sadly the Liverpool Jewish Genealogical Society website has disappeared. There are some other useful links below though. 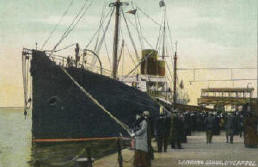 Regarding the "Internment of "Enemy Aliens" in UK during World War Two many were held in the Isle of Man and this is of interest to researchers into British Jewry . The records, when they survive are at the PRO in class HO. See The National Archives Website. HO396 includes: Internees at liberty in UK 1939-1942, German internees released in UK 1939-1942, Italian internees released in UK.

Cheshire (CHS):
Records for Cheshire are housed at the Chester Record Office Email. Births, marriages and deaths registrations are coming on line for Cheshire see Cheshire BMD for details and to search their databases.

Lancashire (LAN) & Greater Manchester (GTM):
Greater Manchester Cemeteries: Crumpsall Cemetery (Manchester Great & New Synagogue Burial Board) Tel: 0161 740 3717 / 0161 792 8399 or email them. They will tell you how to get information from the burial register. A plan of Failsworth Jewish Cemetery can be seen here. Manchester Cemeteries, including Jewish burials in municipal cemeteries, can be searched here. Additionally, Manchester and District Council of Synagogues have a searchable database. Manchester Central Library (see below) holds some burial book invoices, permits for tombstones and reserved graves books. See this link.
Greater Manchester Police Museum, Newton Street, Manchester M11ES telephone  0161 856 3287 All correspondence must be addressed to the Chief Constable at PO BOX 22 (S West PDO), Chester House, Boyer St., Manchester M16 ORE is useful for alien registration documents. (Submitted by Susan McPhedran)
Lancashire BMD project is the sister of the Cheshire site.
Lancashire Record Office: The main contact number for the office is 01772 533039 or fax  01772 533050
Manchester has several repositories, especially if you are looking in Greater Manchester. Try the Greater Manchester Record Office or Manchester Central Library.
Manchester Jewish Museum, 190 Cheetham Hill Road, Manchester M8 8LW telephone 0161 834 9879 fax 0161 832 7353
Manchester and Lancashire Family History Society has all sorts of goodies, including an index to the transcribed "unfilmed 1851 census returns for Manchester"
Manchester and Salford Roll of Honour on-line.
Salford has a small local studies library which you can email.
Tameside are incredibly helpful.

Merseyside (MSY):
Deane Road Cemetery (Liverpool) contains biographies, cemetery maps, photos and more.
Liverpool Community Archivist (Princes Road Synagogue/Deane Road Cemetery).
Liverpool Jewish Gazette Articles: Some years ago, after his mother died, Jeff Max found some pages cut out from the Liverpool Jewish Gazette that his uncle, Abe Max,  had written. These were a series of articles that give a warm, personal insight into his life in Liverpool from about 1908 through to after the 1st World War.
Liverpool Libraries also run excellent services in their local history and local studies sections.
Merseyside Aliens, 1879-1912 This index has over 1300 entries giving details of 'ALIENS' resident in the LIVERPOOL area at the time they applied for naturalisation. The details were extracted from the yearly returns published in British Parliamentary Papers (1879-1912).(Submitted by Jill Hyams) 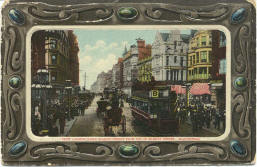