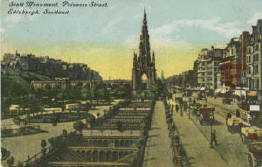 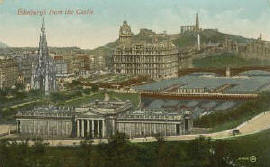 Although there were a few Jews in Scotland in the 1700s, Scotland's first synagogue was opened in Edinburgh in 1816, with a cemetery opening in 1820. Glasgow's first synagogue opened in 1823, with the first cemetery in 1832. Small Jewish communities, with synagogues and cemeteries, have existed in Dundee and Aberdeen since the late 19th century. At one time, there were also small communities in Ayr, Dunfermline, Falkirk, Greenock and Inverness.

Glasgow Burial Society is a wonderful site. If available, the burial record includes Hebrew name, place of death, etc. There are also photographs of many gravestones. Warning - hours can be spent there. [Submitted by Susan McPhedran]

"Caledonian Jews: a study of seven small communities in Scotland By Nathan Abrams" published in 2009, can be partly read on this website. It will be of interest to anyone with rellies in Aberdeen, Ayr, Dundee, Dunfermline, Falkirk, Greenock & Inverness, Highlands & Islands. [Submitted by Miriam Margolyes]

Echobank (Newington) Cemetery , off Dalkeith Road, Edinburgh was used by the Jewish community from around 1869. Most of the Jewish inscriptions were  transcribed by Sidney Cramer in 1951, and the Scottish Jewish Archives  Centre has a copy of his manuscript. In addition, some details are on the Cemetery Scribes website, and they are available online. SJAC has a set of Alan Wilson's photographs, and a list of 130 burials 1869-1961. The current Jewish cemetery in Edinburgh is Piershill, with more than 1300 burials (204 Piersfield Terrace). Cramer transcribed 60 of the oldest  stones, 1890-1923, beginning with Paulina CAMBERG in 1890. SJAC also has  a list of around 1250 Jewish burials in Piershill since 1917, provided by the Edinburgh Jewish Burial Friendly Society.

"Another source which I have had success with is Poor Relief Applications for Glasgow which can be searched by Des Garrity. He will do a search to see if the person you are researching has submitted an application and if there is one then for a charge he will photocopy the information (can be 3 pages) and forward it to you.

"And don't forget The Mitchell Library, in Glasgow. They have a great website and the librarians in the research rooms are extremely helpful. They also have a very efficient e-mail communication." (All the above was submitted by Carole)

Scotland has a lot of records on line, for a fee you can search but it's cheaper to order in person from the Record Office in Edinburgh. The Scotland's People website has censuses (1841-1911 inc.) and civil registrations . You do have to pay for the records on this website. It is £7.00 a time, you get 30 credits which last for 1 year. If you have any credits remaining after that time, you can latch on to them by paying another £7.00. You can buy more than 30 credits in various bundles. It is a good site in many ways as you can print off the certificates instead of paying for them and you know exactly what you are getting. But we wonder if people with few queries could share credits in some way. [Some of the above information was supplied by Theresa Stewart based on her own research and the help she received from other list members when she queried Scottish research]

The birth, marriage, death and census records are available at General register House in Edinburgh, where for a daily fee of £12, access is provided to records from the 1500s to the present. Much of the older material can be printed out for 50p per document.

Harvey suggests you read some of these: