National and local newspaper contain all sorts of reports from simple birth, marriage and death announcements, to inquest and other reports.

Below are examples of things you can find in newspapers. 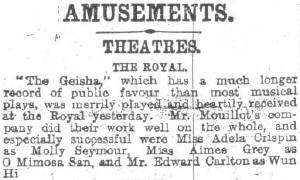 For local newspapers, try your local large library which may well have them on film. Local studies libraries usually have local papers on film.

National papers such as the Jewish World and Jewish Chronicle will be at most major libraries. If all else fails try the British Library (Newspaper Section). They require you to sign copyright forms and the administration costs are not cheap, but they do post the copies in cardboard tubes to prevent damage. Email, visit in person or telephone 0207 412 7353.

Onlinenewspapers.com is a worldwide listing of online newspapers, with a searchable index. Search by region, country, county, city etc

The Jewish Chronicle:
Online searchable database at The JC. Subscription is required to view actual pages.

The London Gazette Search: This contains links to the Edinburgh and Belfast editions.

The Times:
Times Archive 1785-1985 This archive is also available at most large libraries.

The Gale Group:
Offers trial access to the Times here and may have other links of interest.